Hampi - The city of Bijadnagar (Vijayanagara) is such that the pupil of the eye hasn't seen before or the ear hasn't heard off . . . The hospitality of the Kingdom was such that, was never experienced before and shall be experienced henceforth.

A UNESCO World Heritage Site located in east-central Karnataka, India. It became the centre of the Hindu Vijayanagara Empire capital in the 14th century. Chronicles left by Persian and European travelers, particularly the Portuguese, state Hampi was a prosperous, wealthy and grand city near the Tungabhadra River, with numerous temples, farms and trading markets. By 1500 CE, Hampi-Vijayanagara was the world's second-largest medieval-era city after Beijing, and probably India's richest at that time, attracting traders from Persia and Portugal. The Vijayanagara Empire was defeated by a coalition of Muslim sultanates; its capital was conquered, pillaged and destroyed by sultanate armies in 1565, after which Hampi remained in ruins.

Located in Karnataka near the modern-era city of Hosapete, Hampi's ruins are spread over 4,100 hectares and it has been described by UNESCO as an "austere, grandiose site" of more than 1,600 surviving remains of the last great Hindu kingdom in South India that includes "forts, riverside features, royal and sacred complexes, temples, shrines, pillared halls, mandapas, memorial structures, water structures and others Hampi predates the Vijayanagara Empire; there is evidence of Ashokan epigraphy, and it is mentioned in the Ramayana and the Puranas of Hinduism as Pampaa Devi Tirtha Kshetra. Hampi continues to be an important religious centre, housing the Virupaksha Temple, an active Adi Shankara-linked monastery and various monuments belonging to the old city. 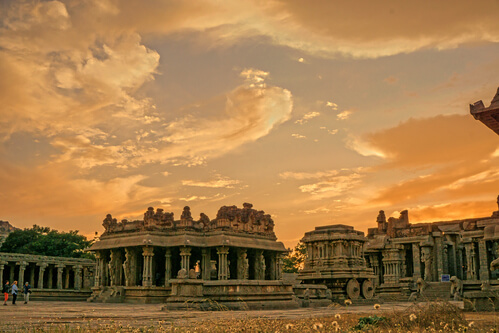 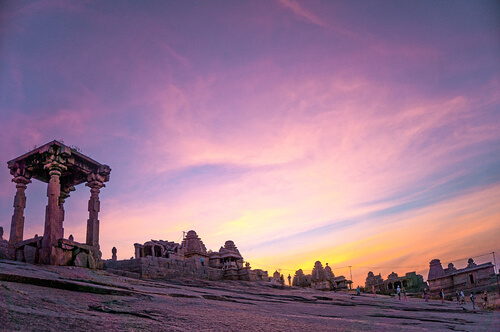 Must see places in Hampi

The Virupaksha Temple which is dedicated to Lord Shiva.
The Main Streets which once sold rubies, diamonds, and pearls on the streets

It is part of the group of monuments in Hampi, the temple is dedicated to Virupaksha- a form of Shiva, it is a main pilgrimage center in Hampi. Built by Lakkan Dandesha - a Nayaka (chieftain) under the ruler Devaraya ii of the Vijayanagara Empire built in the 17th century. Virupaksha is the concert of the local goddess PambaDevi, who is associated with the Tungabhadra river. 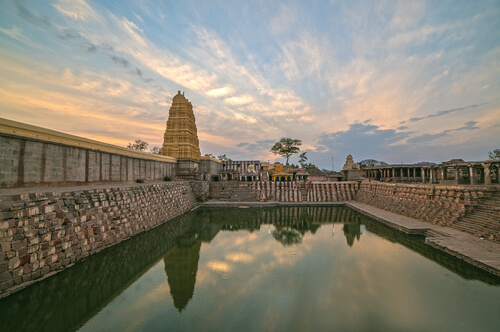 One of the notable features of the Vittala Temple is the Musical Pillars.

The most elegant achievements of the Kingdom was the 56 Musical Pillared Hall, which is in the Vijaya Vittala Temple, enclosure which striking the pillars brings out the 7 Musical Chords and the Stone Chariot carved out of a single Granite rock is an achievement in the field of architecture as one wonders of how the Wheels of a Granite Rock carved Chariot to rotated. The large Ranga Mandapa is well known for its 56 musical pillars. These pillars are also known as SaReGaMa pillars, which are attributed to the musical notes emerging out of them. The pillars produce musical tones when struck with a thumb. 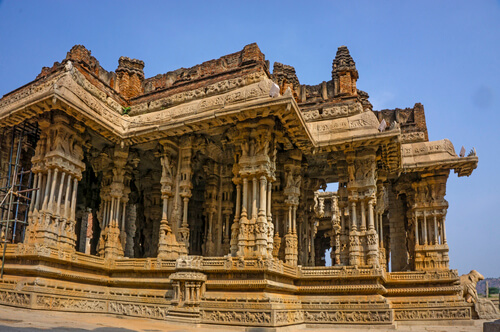 At the height of the Vijayanagar Empire in the 16th century, Hampi thrived as one of the largest and richest cities in the world. Its architectural legacy lives on in the southwestern state of Karnataka with over 1,000 well-preserved stone monuments, including Hindu temples, forts and palaces.

Spread over 16 miles near the banks of the Tungabhadra River, and surrounded by a sea of granite boulders, the Unesco World Heritage site has been notoriously difficult to reach, until now.TruJet recently began daily direct flights from Hyderabad and Bangalore to Ballari, a 25-mile drive from Hampi.